Few other words have touched the heart and influenced thought for generations than Jesus’ 7 sayings on the cross. Here we take a look at them from a public speaker’s perspective. 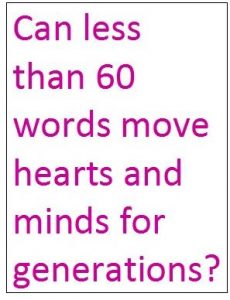 The scene that day was dramatic as well as cosmic.
Jesus was nailed to the cross and lifted high; hanging between earth and sky from 9 a.m. in the morning till the time of the evening sacrifice at 3 p.m.

There was a crown of thorns on his head and a written inscription above him which read, “Jesus of Nazareth, The King of the Jews.” While he lay on the cross, those who passed by hurled insults at him.

Unusually, there came darkness over all the land. Two criminals were also crucified with him, one on the right and another on his left. At the foot of the cross, Roman soldiers cast lots for his clothing.

No man ever spoke so gracious words from such a stage. Here was the Saviour of the world, helpless, naked and bleeding. Such a setting and backdrop gives the utterances of Jesus from the cross a unique place in human history. For the audience was not just the crowds that had gathered, but both heaven and hell were eager witnesses to this event destined to change the lives of men and women, young and old and little children down through the centuries.

An introduction that goes right into the heart of the subject is much appreciated by audiences. Here Jesus is clearly showing the purpose of his suffering. He was shedding his blood for the forgiveness of man’s sins. From a speaker’s perspective note also the confidence with which these words were spoken; the confidence that his words would be heard by his Father in heaven. Confidence born of conviction is an asset to any speaker on any given day; isn’t it?

This is the only one instance in the gospels where Jesus is addressed by his name alone without any other titles attached.

Communicating hope is perhaps the highest calling of any speaker. Here the man is expressing his need to find salvation. Jesus is able to meet that need, assuring him of a place with him in paradise. Therefore that man died in hope; assured of a home in heaven for he had placed his faith on the King and his kingdom. In today’s world characterized by all kinds of fears and tensions and anxieties, if the speaker can communicate hope to the audience of a better and bright tomorrow; then he has done the world a great service indeed.

A speaker should exhibit care towards his audience. As it is said, “People don’t care how much you know until they know how much you care.” Jesus, even in his moments of great agony, was ever mindful of the need of his mother to find rest and joy in some home the remainder of her days on earth. So also a speaker should be able to sense the unspoken needs of the crowd he is addressing and come up with a solution that shows he cares.

This is the only instance in the gospels where we find Jesus addressing his father as God instead of Abba which means Dear Father. The reason being that the entire sin of the world was now placed on him and for the first time Jesus was experiencing the separation that sin brings between God and man. The darkness that came over the whole land was a reflection of this inner struggle of Jesus as he the Sinless One was experiencing the wrath and judgement of God against sin for you and for me.

A speaker has to identify himself with the audience.Here Jesus identifies with suffering humanity who constantly ask this question, “O God, why have you forsaken us?” Those who suffer unjustly find solace in this cry of Jesus knowing that he too passed through the dark night of the soul. When an audience knows that a speaker has experienced what they are going through, he gains greater credibility with them.

Many speakers find it difficult to open up before audiences. . They are afraid to share a story from their life. This is because they fear that if they are shown as weak, then audiences would not regard them in a favourable light. But Jesus was different. The tremendous loss of blood following the physical abuses that were heaped on him made his tongue stick to the roof of his mouth. So as a human being he made his weakness known. The lesson for a speaker is that he should never fail to highlight the common human aspect of his life and make it known to his audience. It is then that audiences warm up to a speaker.

It is finished is one single word in Greek—tetelestai. At the end of the day when a person had completed the work that was assigned to him he would say tetelestai. When someone paid off a debt he owed, he was issued a receipt that was stamped with the word tetelestai, which meant paid in full. Jesus, by crying out tetelestai was saying, whatever his Father had sent him to do was now finished. His innocent blood had now been poured out for the forgiveness of sins. Nothing remained to be done for man’s salvation—anymore! It was all done by him. Therefore it was a victor’s shout, a cry of triumph. It is finished. Tetelestai.

As we look at this from a public speaker’s perspective, many speakers who begin well end with a whimper. This is true not only of speech but also of life as well. A speaker should determine to finish strong, not only in his speech but in his life too. Jesus, knowing that he had fully paid for the sin of the world, said, “It is finished.” It was a cry of triumph. So also, a strong conclusion is a must for a great speech. Weak conclusions leave a weak impression in the minds of the audience. It frustrates them with a sense of incompleteness. But here we see Jesus finishing on a strong note.

A graceful exit is as much a thing of beauty as a great performance. A speech ideally should end on a positive note of looking forward with hope. In this last saying, Jesus is quoting a prayer which says “Into your hands I commit my spirit.” It was a prayer that every Jewish mother taught her child to say the last thing before he or she slept at night. Here, Jesus dies like a child falling asleep in his father’s arms. It was indeed a graceful exit.

Ultimately the success of any communication depends on what the audience perceives about it. Though the vast majority in the crowd thought that Jesus’ life had ended in failure, a centurion of the Roman army who was in charge of the crucifixion was moved by Jesus’ death. The gospels record thus: “And when the centurion, who stood there in front of Jesus, heard his cry and saw how he died, he said, `Surely this man was the Son of God!’ ”

Jesus’ Own Perspective about His Crucifixion:

He had said this just a few days before he was crucified:

Truly, the words he spoke on the cross too add to this attractive power—the magnetic pull of the cross.

A Short Meditation on the Blood of Jesus
2 Minute Speech on the Meaning of Life!
A Short Speech on Love
A Successful Comeback Is Possible for You!
By the Rivers of Babylon: A Song of Hope in a Long Night of Captivity!
Rise Up and Soar on Wings like Eagles!
“Call to Me and I Will Answer You” Is the Invitation and Promise of Prayer