“What is it, Peter?” I said, “Nothing Sir.” But Prof. James M. Stewart persisted with the question. He had earlier asked our class, “Where have you heard of Venus before?” I had then whispered to my friends, “Circus.” And it had not escaped to catch his attention. 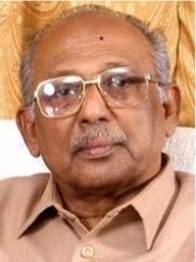 And as Prof. J. M. Stewart quizzed my friends, they blurted out, “Circus! Venus Circus!” (referring to the famous touring circus company). And then, breaking eye contact with me, and turning to the whole class, he made this classic remark: “See, how different people have different tastes according to their profession!” His ability to improvise on all occasions with his silver tongue was profoundly amazing.

Later when I started my public speaking training program in the year 1996–a year after I passed out from Mar Ivanios College–I vividly remember that I took the first copy of my program’s brochure to our beloved teacher, Prof. James M. Stewart, so lovingly known as “Stewart Sir.” With the kind of respect he has in my heart, I couldn’t think of anyone else to share about my venture first. I write this with a great sense of loss at his passing away yesterday on 21st May 2021. He had exhibited great affection, love and care towards me as he had a close-knit brotherly bonding with my late Daddy.

When I first told Stewart Sir of my interest to pursue English Literature, he encouraged me a lot to do so. And my life was scripted through a road that was less travelled by in later years, through the study of English Literature and various leadership and performance opportunities I got at Mar Ivanios College to excel in public speaking. Stewart Sir was always there to encourage me in my efforts in this direction.

JMS was how his name was written in short form. Those three letters together struck a note of respect always. There are so many varied aspects of his character that made his personality stand out. I would like to highlight just three of them.

First of all, he was a gifted orator. He spoke with great command in both English and Malayalam. His speeches are remembered by all who heard them. There was no thundering rhetoric but logic working its way through with gentle persuasion. There are two moments I recall. One, after one of his sermons at our church (we both attended the same church), I went and asked him, “Sir, when will I be able to deliver a speech like the one you just did?” I was fascinated by his ability to hold a twenty-minute sermon on one single point, having all of the listeners engaged in his oration.

On another occasion, after I had given a sermon on Jesus the Good Shepherd, I just walked up to him to listen to his invaluable feedback. He put an arm around my shoulder and said, “My son, you could have left out the second and third points.” I learned the value of ruthless editing from him. When he mercilessly struck off many of my creative writing efforts with his turquoise blue ink, I realised how his thoughtful editing made my writing powerful. Further, no one can forget the kind of stage presence he had; how he could grace an occasion with dignity; and the felicity of words with which he could make even an ordinary occasion look grand.

Secondly, he was a gifted teacher par excellence. He took his time to get through a passage, be it poem, prose, or drama. He brought to life each word, scene, and character with his ability to dramatize without making us conscious of him doing so. Perhaps his greatest ability as a teacher was how he could connect the text being taught with real life examples, to people, and to life’s varied situations. He once quoted, “Experience is the comb you get when your head becomes bald.” and it took a lot of time for us to value its wisdom.

Life had taught him many lessons, he used to say, and he took them in his stride even when they took him through grief and loss. One of the things he took pride in was that he was teaching Literature. He used to say, “In Science, you learn about life; in Literature you learn life.” I have heard a professor (who is now no more; also, a former student of Stewart Sir) who stood with us in front of a class room and said, “Stewart Sir is yet to complete a few lessons for us.” He said that with a touch of humour; but it also says how much his students loved his sessions. Perhaps it is true, “Heard melodies are sweet, but those unheard are sweeter.”

Thirdly, he commanded awesome love, respect, and admiration from all his students. He was strict and there was no doubt about it. And even his firm look was sufficient enough to make students who were simply wasting their time scurry away from in front of the Department of English. His voice carried the command of a War General.

At the same time, he could understand students like no one else usually did. Even with the most violent guys in the college, he had a way to soothe them by putting his hand around their shoulders and asking gently, “What’s troubling you?” He alone would walk into the midst of a brawl and simply with his words would push two warring factions of students away from each other. I’ve witnessed this myself with great disbelief at times. Students would walk up to him and pour out their hearts to him, vent their troubles in family or life. And in him they found someone who genuinely cared. We have heard many life lessons that he had to share from such conversations.

Some time ago, I was able to visit him at his home and spent some time with him conversing. Even when he had difficulty remembering everything; still he was able to recall many moments and asked questions about them. Unable to see when I met him last, he said he was spending much time listening.

Maybe I cannot close without mentioning one fact: in the early days of my blogging, he used to send me encouraging comments after reading some of the posts. A man of his stature finding time to read and comment on one of his students’ writing tells volumes of the mettle of his character; doesn’t it?

And now leaving aside all else I could say of him, like the relationship he maintained with Bishops and clergy across Christian denominations, politicians, administrators, and former students; his tremendous gift of organizing mega events, his skill with the written word, his contributions as an Editor and many things more; I would like to close by saying that as a teacher he inspired, motivated, and set standards of excellence that is difficult to emulate. But the light he was able to ignite in the hearts of many, the love he had for all of us students, the great aspirations he had for us; will always be cherished.

There are many more things to say. But as he often said, “When the heart is full; words are few.”

What Better Hope in Life Do You Have Than This?

Radio Talk: The Art of Public Speaking
A Note of Appreciation to All Teachers with Love and Utmost Respect
Bishop Jesudasan–A Short Speech of Tribute
Speech for School Children on Dr. A. P. J. Abdul Kalam the Missile Man of India and a Dreamer!
A Teacher’s Motivational Speech: Three Life Lessons Every Student Should Know