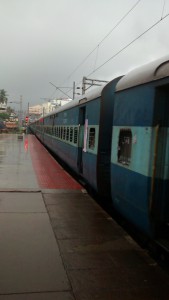 “For the attention of passengers, Train No. 12696, from Thiruvananthapuram to Chennai Central will leave shortly from platform No. 3 at 17 hours 25 minutes.” As this was ringing in my ears, little did I know that I was about to witness a memorable incident right there on the platform.

This incident occurred a few years ago at the platform of Thiruvananthapuram railway station (in Kerala, India). I had gone to see my parents off. After they had been seated inside the compartment, I waited outside on the platform by the window of the train. It was almost time for the train to move.

Then I saw a man rush out of the door nearby. He stooped down on his knees on the platform and was frantically trying to get something from underneath the train. Since it was time for the train to move I became curious and went near him to see what it was. He was trying to get one sandal that his little daughter had thrown out through the window. Unable to get it, he ran to a small shop on the platform, borrowed a stick from them and tried hard to lift the sandal.

By that time the signal had turned from red to orange and the blast of the horn was heard. I went near that man who was down on his knees and bending way down towards the railway track in that narrow space between the train and the platform. I tapped him on the shoulder and said, “The train is about to move. The signal is going to turn green. Be careful. Leave the sandal!” But he was in no mood to listen (whether the sandal cost a fortune or whether it had some nostalgic value; I don’t know). Yet just in the nick of time, before the train started moving he lifted the sandal, and with a proud smile on his face boarded the moving train.

For a moment, caught up by the drama of the man in action, I had forgotten that I did not say goodbye to my parents. As I realized it with a jolt, I saw my parents come to near the door to look out to see what had happened to me. I waved to them to say everything was O.K.

It was then that I saw that wonderful sight. As the man was moving towards his seat with the reclaimed sandal proudly lifted up in his hand, and as soon as he reached his family; the little girl threw out the other sandal she had with her from the moving train!

I wondered how silly people act at times. The man, in the first place, should have responsibly valued his life (especially in relation to his wife and kids) and refrained from trying to lift the sandal as the train was about to move. Secondly, he could have listened when I told him to leave the sandal alone. Finally, he could have stepped into the shoes of the little girl who might have thought, “If one sandal is gone, let the other also be left behind!”

Then I thought again. How many times we too like that man have acted foolishly in life even after seeing warning signals? Often it’s by God’s grace alone we live to get a second chance.
—
Jesus Christ of Nazareth!